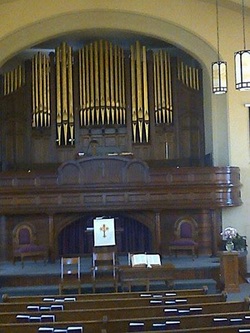 Acting on a request from Ezra Brown, the Regular Baptist Missionary Society assisted Rev. Peter McDonald to serve as a missionary to this new settlement.

On April 11, 1853, he and his wife met with four other persons in the McDonald home to covenant together to take the New Testament as their rule and guide as understood and practiced by the Regular Baptists of Canada.

They met in rented rooms and halls, until erecting their own building on 4th Ave. East, near the old Strathcona School. It opened in November 1860 with church membership about 29.

A move to the present site into a frame building took place in December, 1879, when the church numbered about 60. Membership increased greatly in the next two decades, and under Mr. William Kennedy Jr’s influence plans for the present building were accepted. The cornerstone was laid in 1902 and the dedication took place on April 5, 1903. The mortgage was burned in 1921.

In 1911, the family of John Harrison gave the Matthews pipe organ to the church in his memory. This has become an historic instrument which the church cleaned and restored as close to the original as possible in 1990.

For over 160 years, First Baptist Church of Owen Sound, situated on "Salvation Corners" at 10 Street East and 4th Avenue East, has witnessed to the gospel of Jesus Christ. Standing on the shoulders of those who have gone before, we continue that witness to the glory of God.